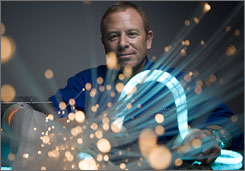 Brett Kingstone started his first business — a lemonade stand — at age 6 in New York. But instead of buying soda or candy with his earnings, he chose to save it for college.

A couple of years later, he earned money by selling baseball cards and fireworks, and by riding his bike to the affluent section of town to shovel snow for $5 per driveway.

Kingstone also was the No. 1 daily news carrier in the state of New York, and his reward was a chance to sit with John Wayne at the premier of The Cowboys.

“I was always into making money on my own,” says Kingstone, the 36-year-old founder, chairman and CEO of the publicly held Super Vision International.

The Orlando company was formed in 1990 and went public in 1994. It makes fiber-optic lighting used in signs and other places that once were the sole domain of neon lights. Fiber optics are long, thin plastic or glass strands that conduct light.

“Brett is a terrific entrepreneur,” says Anthony Castor, president and CEO of Hayward Industries. “He has a very high energy level. He’s extremely bright and creative. He is the biggest champion and advocate of his own business. I think Brett has a lot of vision and has been able to convert that vision into a successful company.”

Kingstone, the oldest of three brothers, grew up in Brooklyn and Long Beach in New York. His mother, Renee Kingstone, was a nurse, and his father, Leonard Kingstone, owned a small mattress factory.

Kingstone’s father, a Merchant Marine in World War II, taught him how to fight and told him to protect his younger brothers. As a result, Kingstone, who calls himself a reformed “hot-head,” got in many fights that left him physically scarred. The fights also got him thrown out of junior high and high school several times. But his straight A’s helped him back into school, after spending a year in a military academy.

“I had to salute the drill instructor’s dog because he even had more rank than me,” says Kingstone, who wears faded blue jeans, tan work boots and a golf shirt to work.

Kingstone was 16 when his father died. Overcome with grief, Kingstone decided to join the Marines instead of going to college, but his mother wouldn’t sign the papers required because he was under 18.

“I respect the level of ethics of people in the military — people who are willing to risk their lives for something they believe in,” he says.

While attending Stanford University in California, Kingstone “blew up the lab a few too many times.” His professors encouraged him to start his own business so any future accidents would be on his own dime.

He made his first fiber-optics sign in lieu of taking a final exam.

“A couple of my prototypes worked, so I strapped them on my motorcycle and took them to Disneyland,” says Kingstone. “They gave me a purchase order.”

That’s when Kingstone started his first fiber-optics company, Gekee Fiber Optics. He sold that business a year later — in 1981 — to a Japanese company, Data Control Ltd. With the money from the sale, he started a publishing company called Dupie Press.

He also wrote two books during that time: The Student Entrepreneur’s Guide: How to Start and Run Your Own Business (McGraw-Hill) and The Dynamos (John Wiley & Sons), which featured 100 top entrepreneurs under the age of 30.

After selling the publishing company to a division of Random House in 1981, Kingstone used $250,000 in 1990 to buy equipment to start Super Vision in a garage with two other people.

“We were just a bunch of kids and figured anything was possible,” he says.

Today the firm has 64 workers. Kingstone predicts the company will have 100 employees by mid-1997 and $20 million in sales next year.

He is building a $2.5 million, 70,000-square-foot factory for the company on five acres by a lake on President’s Drive. The company broke ground on the new facility in early November.

“Sixty percent of our sales are outside the U.S.,” says Kingstone. “We have gone from the smallest to the largest company in our field in five years.”

Being international benefited Kingstone personally, as well. He met his wife, Maisa Kingstone, through a client in Argentina. He proposed two weeks after they met, and they married two months later. Their daughter, Victoria, was born in October.

Kingstone plans to raise Victoria without a television in the house.

“It’s total garbage,” he says. “Instead, we have a lot of computers in the house. Because of TV, we have a nation of kids who all want things without working to get them.”

He eventually plans to buy some buildings downtown and turn them into residential lofts.

“If people had real cool places to live downtown, they’d choose that,” he says.

“Everyone has woken up in the morning with a great idea to make $1 million, and then most of them take a shower and go to work and forget about it,” he says. “Being a dreamer is important, but being a doer is key.”

The challenge ahead is keeping the workers and customers happy while growing at a rapid clip.

“We’re now approaching sales of $1 million per month,” says Kingstone. “As we grow, I don’t want to lose the entrepreneurial spirit. I never want to see the spark extinguished.

“Every employee here is a shareholder,” he says. “As the company succeeds, they do too, so that builds a lot of loyalty.”

Much of Kingstone’s success could be attributed to the fact that he “is driven beyond belief,” says Larry Haber, director of business affairs at Walt Disney Attractions Television Productions. Haber has known Kingstone for seven years.

“I have dealt with a lot of small business owners, and I have never met anybody as singularly competitive as he is,” says Haber, also an attorney. “Brett goes after what he wants and he gets what he needs.

“A lot of people get put off by his aggressiveness — if you’re too slow, he’ll run right by you,” says Haber. “He’s a tough businessperson, but not unfair. He’s by the book, but he pushes.”

A typical day for Kingstone begins by rising at about 6:30 a.m. and running with Luis, his yellow Labrador. After changing the baby’s diapers, he works out or goes for a swim before going to the office.

At work, Kingstone answers phone messages and faxes, then gets involved with research and development at the company and deals with clients. Working with clients “is the most fun. It’s exciting to have many international friends and clients.”

He also deals with issues related to Wall Street, talking with investment bankers and shareholders, as well as checking financials. His workdays end anytime from 7 p.m. to 2 a.m., and he often works weekends.

“Some people bring their kids and dogs in on weekends, making the place like a festival,” says Kingstone.

Kingstone encourages workers to try to think of some small way every day to make the products better, cheaper and faster.

“I believe that small, incremental improvements every day make a big difference,” he says.

Kingstone says he will consider his company a success “when all our shareholders, investors and employees can pay for their kids’ college educations and pay off their mortgages from their profits on Super Vision stock and stock options.”